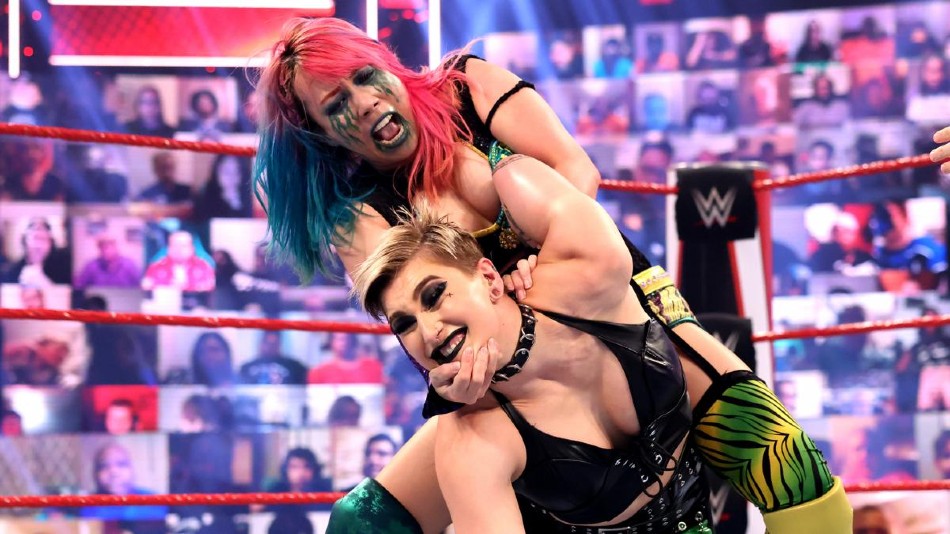 Plus, two separate tag team matches were also on the card from WWE’s male and female tag team division, while a former WWE Champion returned on the show that aired from the Yuengling Center in Tampa, Florida.

Check out the results and recap from WWE Raw before Backlash 2021:

– Asuka, Mandy Rose, and Dana Brooke vs. Charlotte Flair, WWE Women’s Tag Team Champions Nia Jax, and Shayna Baszler was the opening contest lineup. Interestingly, Alexa Bliss and her doll Lily watched from the ramp and started laughing in between the match.

The finish came as Brooke knocked Charlotte off the ring and slammed Baszler. Brooke with more offense but Baszler gave her a backbreaker over the knee. While selling the leg injury Asuka received the tag and executed a Shining Wizard for the victory.

– Jinder Mahal defeated Jeff Hardy on his WWE Raw return with his new stable members, Veer and Shanky. The former WWE Champion countered a Twist of Fate with a jumping knee. He secured the pinfall win with the Khallas finisher.

– RK-BRO (Randy Orton and Riddle) and The New Day (Kofi Kingston and Xavier Woods) defeated Elias, Jaxson Ryker, and WWE RAW Tag Team Champions AJ Styles and Omos in a huge eight-man tag team title match. Orton RKO-ed Elias for the finish. Once the match was over, he planted both Woods and Kingston with RKOs.

– Sheamus defeated Humberto Carrillo via referee stoppage to retain his United States Championship. It seemed Humberto was hurt, legit during the match. He went for a Sunset Flip Powerbomb from the ring apron to the floor but Sheamus ended up landing on top of Humberto’s leg to cause the injury.

– Shelton Benjamin defeated Cedric Alexander in a singles contest. Shelton hit a T-Bone Suplex for the pin to win.

– Drew Gulak wanted a rematch with Angel Garza as last week on WWE Raw, the latter embarrassed him by shoving a rose into his butt. But Garza assured Gulak that next time he will shove that rose down his throat.

– WWE RAW Women’s Champion Rhea Ripley defeated Asuka in a one-on-one contest with Charlotte Flair watching from ringside. Ripley caught Asuka’s Hip Attack move and hit her with the Riptide for the finish.

– Damian Preist defeated John Morrison with Hit the Lights finisher. Per the stipulation of the match, Priest earned the right to pick the stipulation for his match against The Miz at WrestleMania Backlash. Priest chose a Lumberjack Match. The Miz attacked him after the match, but Priest fought him off to stand tall.

– A new “Eva-lution” vignette aired on Raw to promote the return of Eva Marie aired. Eva sent a short message on how she’s going to be a super role model.

– In the final match of the night, Drew McIntyre defeated WWE Champion Bobby Lashley via disqualification. The ending moments saw McIntyre delivering a Claymore Kick but Braun Strowman came out as he attacked McIntyre from behind to cause the DQ.

Strowman then picked Lashley’s body and powerslammed him through the barricade as both landed into the virtual crowd. Strowman came back into the ring and hit another powerslam on McIntyre inside the ring to end this week’s Raw.

You have already subscribed