Sunrisers Hyderabad kept their IPL 2022 playoff hopes alive as they defeated Mumbai Indians in match 65 of the competition. Rahul Tripathi shined with the bat, helping the team to post a massive score. The job was then completed by the bowlers led by Umran Malik. SRH have ended their five-game losing streak and remain in contention for a top-four finish.

After being asked to bat first, Sunrisers Hyderabad lost Abhishek Sharma early but a sensational knock from Rahul Tripathi saw them post a mammoth score, Tripathi registered his 3rd fifty of the season while stitching partnerships with Priyam Garg and Nicholas Pooran. In reply, Mumbai Indians were off to a great start but lost their way in the middle overs and weren’t able to recover.

# Sanjay Yadav made his IPL debut

# Mayank Markande played his first game for MI in IPL 2022

# Rahul Tripathi scored a third half-century of the season

# Bumrah is the first Indian to achieve this feat in IPL

Both teams will now turn their attention towers their next and possibly the final fixture of IPL 2022. Mumbai Indians will take on top-four chasing Delhi Capitals, who need a win on the final day to secure a top-four finish. Meanwhile, Sunrisers Hyderabad face Punjab Kings with another playoff spot on the line.

(The above story first appeared on SociallyKeeda on May 17, 2022 11:58 PM IST. For more news and updates on politics, world, sports, entertainment and lifestyle, log on to our website SociallyKeeda.com). 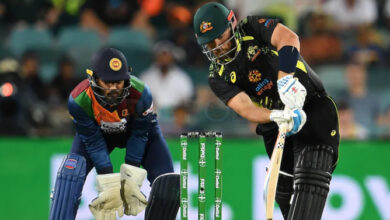