There are followers of the actress Hansika Motwani all over the world now after she exhibited her acting prowess in South films. Fans of Hansika, who began her career as a child actor, are anxious to see her. Every time the actress appears on film, viewers cannot look away from her.

Hansika Motwani also works hard to maintain a social media presence for her followers. In this case, her Instagram page also offers views into both his professional and personal lives. The actress’s photo shoots often remain in discussion. Once more, Hansika’s daring appearance caught everyone’s eye.

Every Appearance of Hansika Motwani is Attractive

The most recent photographs show Hansika Motwani in a variety of interesting poses. She is shown in the first image sporting a skin-tight shirt.

She can be seen in the second image sporting glistening bottoms and a grey off-shoulder shirt. The next images further display the actress’s striking appearance. When it comes to fashion, Hansika is fire.

Fans of Hansika like every appearance that she has. Numerous comments have been made appreciating her. Millions of likes had quickly accumulated on the actress’ photographs at the same time. Her post is becoming more popular on social media.

Significantly, Hansika has a long list of movies to appear. She will appear in the movie “Guardian”, “Rowdy Baby,” “My Name is Shruti,” “105 Minutes,” and “Partner” soon. In addition to this, the actress is awaiting the “Nasha” and “My 3” web series. 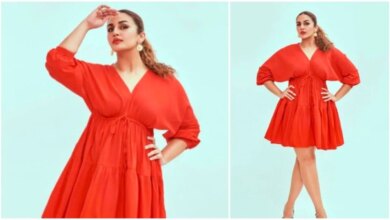 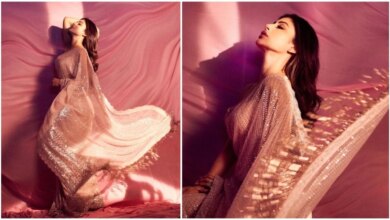